I really like that sling, did you make that??

I take mine out, great advertisement! Almost everyone thinks they are real. Just don’t leave them like this in your car, lol… 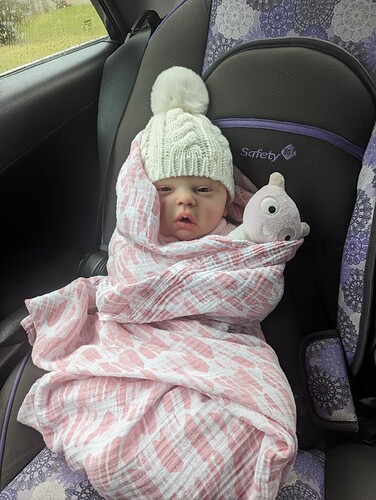 Beautiful baby! It looks like Elyse?
Yeah definitely not to be left in the car, people might break windows if they see that😫

I take mine out occasionally, not as much as I used to though for a few reasons. 1- im 15 so I’ll get some dirty looks when I take them out (teen pregnancy lol) 2- I have a surplus of siblings so theres already enough kids without a fake one coming along!

Here are pictures from when I have taken them out. These are dolls from 2020-2021 when I was first starting out 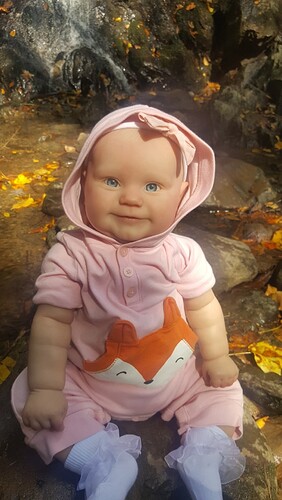 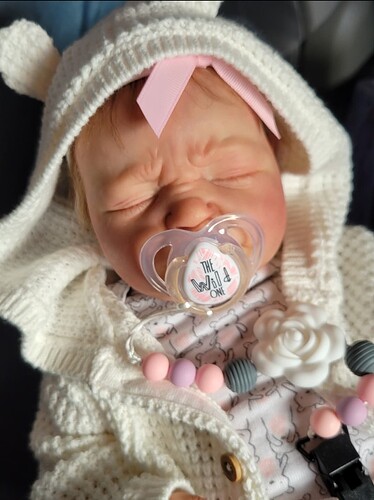 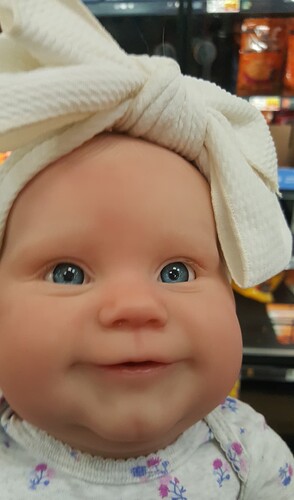 (This one was taken in Kroger, they have great lighting!!) 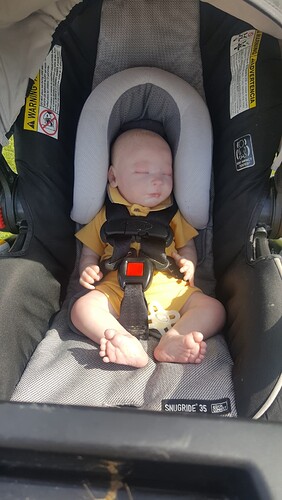 I love that, a surplus of siblings

Very pretty babies and nice lighting on Maddie’s face! It’s hard for me to get the best lighting that really shows true coloring and all the details, so I get excited for that too lol
I so wish I had known the art of reborning when I was your age. I knew of the dolls themselves but never knew that it was not box stores making them.

Thanks! Yes, my keeper Elyse. If I leave her in the car briefly I make sure to throw a blanket over her

Before Covid I used to take my babies out all the time, just not if I was in a hurry because once people find out it’s a doll, it takes forever to get out of the store. I took one into Walmart and shut down 2 check stands because everybody wanted to see it when they heard it wasn’t a real baby. I took a toddler one with me to a restaurant and was asked if I needed a booster seat. These times were fun. Airport security was not. When I put it in the bin there was a collective gasp behind me until I said ‘It’s a doll’. Then everybody wanted to see it.Security stripped the doll, swabbed it, scanned it and gave it back to me naked. They were careful with it, though.
I really enjoy taking my babies out. It’s great advertising and people’s reactions are very validating. I always take a handful of business cards with me. I never leave my babies in the car. I don’t want them stolen or have my windows smashed to get the ‘baby’ out.

All of your babies look so reaI.
I have only taken mine out when I was moving across country. Saskia was new to me and in a craft case.

@RosieCait I really love that crochet doll with the mask. Did you make it? I need one.

I’m not much on attention, so I don’t take mine out. I have been with my niece when she was young and carried around the one I made for her, definitely an attention grabber lol.
I have been thinking of taking 7 month June shopping for clothes when she’s finished, if I can get up the nerve to

I didn’t! It was a gift from a friend. Right now he’s in storage somewhere but I’d be happy to send him to you when I get him out of storage.

What? For real? I would gladly pay for him and shipping. Just let me know. Thanks!

I took a few dolls to Ohio with me in my grandmas honor when she passed away. I took one in to her wake and a lot of the ladies found it comforting. I gave my Christopher to my aunt because she got attached and it helped her grieve over her son she lost. She named him Steven after him. He was 26 when he drown in geauga lake. Another aunt asked me to make one for her grand daughter and my cousin had me make two for her daughter. So I guess that worked out good

. I was super nervous taking one to the wake though but since my grandma was a huge toy collector and had a bunch of store bought play dolls in the nursing home I figured it would be a way to remember her.

My apologies for my above post, I said I don’t take my babies out in public, I lied. I don’t take them to stores etc. but I have taken them to the ROSE doll show and therefore had to fly with them-----So, I have had them out in public at the airport. The ROSE show doesn’t count because EVERYBODY has a baby there. I try to dress them in something “short” so their legs and arms are bare, that way when security “swabs” them they don’t have to undress them and I don’t have to waste time dressing them back up. Security is very gentle with them though, they know they are expensive “toys”.

The sling I got from Amazon! It’s Bixby brand.

I have on occassion but have had som interesting experiences. I left my baby in the front seat to go into a store and 3 men came in to use the phone to report a baby left in a car. Another left baby in back of subaru , got groceries , the girl carried them out and when I rolled back my back cover she screamed , you left your baby out here in the heat. Last one I’m in produce and an older gentleman came by and said what a beautiful baby then went on to say he would never be a grandfather because his daughter didn’t want to have children. I felt so bad I didn’t have the heart to tell him it was a doll. So if you are in a hurry don’t take a baby with you, do take cards, and be prepared for strange questions and looks. I spent 40 minutes in a Subway store while everyone took a photo with my baby and one guy a new father to be freaked, he wanted to hold it and screamed my god its not breathing, anything can and will happen. LOL

Awesome, thanks. Thats a fun way of taking your babies out!!